The staff at Garden City Dance Studio has been highly trained in all fields of dance, including choreography, principles of teaching dance, dance history, acting, theater design and production, dance therapy and child psychology. This is what puts Garden City Dance Studio in a class of its own. We take pride that our teachers always give personal attention to each student. We encourage each student to develop good attitudes about themselves and their fellow dancers. The professional and positive atmosphere of our studio helps prepare our students for the dance field with confidence. We know you will find our school to be the highest in quality.

Cathy Fonte has been the owner/director of Garden City Dance Studio since it was founded in 1980. She has studied Ballet with David Howard and Tap and Jazz at Broadway Dance Center, Phil Black Dance Studio Cathy also studied with Luigi and Joe Lanteri. Her love for dance gave her the motivation to open her own dance studio. After 35 years, Garden City Dance Studio has expanded from one studio to 7 studios and an enrollment that increases every year. Cathy, along with her professional staff has made Garden City Dance Studio the number one place to be. Cathy is always available at the studio for all your dance concerns.

Eric is a California native who moved to New York City to pursue his love of dance at 19. He has appeared on numerous television series and specials including the MTV Movie Awards, the MTV Video Music Awards, the Grammy’s, the BET Awards, and the Blockbuster Awards. Eric has danced with several artists including Aaliyah, The Backstreet Boys, Lil’ Kim, Mikaela, and Usher. He appeared in the smash hit musical Grease on Broadway and has done regional productions of Gypsy, A Chorus Line, Guys and Dolls, and The Unsinkable Molly Brown. Eric appeared in the hit Bollywood movie musical Jaaneman, and has danced in several commercials and industrials for companies including Propel Water, Stouffers, Toyota, Nissan, Aventis Pharmaceuticals, Old Navy, Target, Nike, and Wrangler Jeans. As choreographer Eric toured Germany with the bands B3 and M*Pire, and has worked with recording artists Real Soul and Kelly McCarthy. He currently choreographs shows and industrials for Carnival Entertainment, and teaches for several conventions throughout the US and Canada. Eric’s belief that dance and movement can be ones voice led him to China and India in the summer of 2012. He was honored to work with students at the prestigious Hebei Art Institute in Shijiazhuang, Hebei, China, where he was a guest of the Chinese Government. Due to an overwhelmingly positive response to his work, Eric was requested back to create a dance curriculum for several universities in the Hebei and Shandong provences in November of 2012. He will return annually to continue the curriculum. In India Eric had the privilege of working with many successful Bollywood and contemporary dancers as a guest of United Dance Center and Split Sole Dance Academy. He appeared on several talk shows while in India and can be seen in The India Times and WOW Hyderabad magazines. Eric is on staff at Broadway Dance Center in NYC, subbing regularly and working with the ISVP program.

Jillian holds an MA in Educational Theater from New York University, an MA in Communications from Hofstra University, and a BFA in Theater Arts Performance with Minors in Dance and English from Hofstra. Additionally, Jillian holds certification from American Ballet Theatre's National Training Curriculum as well as Yoga and Zumba certifications from multiple fitness organizations. Jillian has taught and performed across the world, including venues in Italy, Austria, Puerto Rico, and Walt Disney World. She continues to work on stage and screen and has been seen on networks such as NBC, Oxygen, Cartoon Network, Discovery ID, and hosting for Radio Disney. She has also worked behind the scenes in casting offices such as ABC Primetime and in PR for Broadway shows like Hair and Spider-Man

LaToya has been dancing for over 20 years.  Originally from Utica, NY, she is trained in various dance techniques and grew up as a competitive dancer.  She is a graduate from Manhattanville College in Purchase, NY with a Bachelor’s degree in Communications and Dance and Theatre.  During her college career she had the opportunity to work with guest choreographers such as Darrah Carr, Earl Frederick Mosley and Ronald K. Brown from the Alvin Ailey Dance Theatre. LaToya was a Knicks City Dancer for six years; being captain for the last two.  She is currently the Assistant Coach for the Knicks City Kids for the NY Knicks and Head Coach of the Timeless Torches dance teams for the WNBA Liberty.  For the past four years LaToya has been selected to dance at the NBA All-Star basketball games, held in Los Angeles, Orlando, New Orleans and New York. LaToya has danced with artists Rihanna, Lenny Kravitz, Flo Rida, Pitbull, Ne-yo, Jason Derulo, Labyrinth, Natasha Mosley, Vanilla Ice and Mack Wilds. In 2012,  LaToya was selected to dance in the Pre-Olympic Tour held in Manchester, England. She has had the opportunity to dance in various countries including Italy, France, Spain, Germany and China.  Along with dancing abroad, LaToya has been casted in many television commercials and shows.  She was cast in her first motion picture "TRAINWRECK" in 2015.

Classically trained in Ballet, Modern, Tap and Jazz dance, Marykate grew up in a competition dance team environment and was a part of an Access Broadway Nationals winning team in 2011, competing with all dance genres. She now performs as a contemporary dancer with DanceWorksNYC. Marykate is a graduate of Manhattanville College with a BA in Dance and Theatre along with Communications. During her college career, she was a member and captain of the official dance troupe. She was also cast in a dance on film documentary produced by Peter Pucci titled “Swag-n-Bach.” Marykate had the opportunity to work with guest choreographers such as Earl Frederick Mosely and the theatrical Clare Porter. Marykate has also been an assistant at The Madsion Theater at Molloy College where she was a judge for the Nassau’s Got Talent Competition and performed for the Long Island Film Festival with Broadway choreographer, Lisa Gajda. Marykate enjoys being a Pure Barre instructor, incorporating her love for fitness and inspiring others of all ages and abilities.

Tiffany Fonte. Former Captain of Oceanside dance team, Tiﬁany has been a competitive dancer for 14 years and has been a ﬁrst place soloist for several years. She has also choreographed many group dances, solos and duets over the last 3 years and many of her high energy routines placed top three along with many first place wins and many special awards. Her Hip-Hop classes have become one of the very popular classes here at Garden City Dance Studio. Tiffany is currently a choreographer with our Competition team.

Camilia Rodrigues, originally from Brazil, has made her mark in New York in performances of The Nutcracker, Opera Romeo and Juliet,and many more. Camila has also performed with companies such as Joffrey Ballet Concert Group, Nashville Ballet, Neglia Ballet, Movement Headquarters Ballet, and in companies overseas including Beijing Ballet Academy's Gala in Beijing, China and Companhia do Theatro Municipal in Rio de Janeiro, Brazil. She was most recently casted in Catskill Ballet Theatre's production of Alice in Wonderland as Alice, but the show was sadly canceled due to COVID-19. Camila has also won many awards in regard to her ballet training/performances at Valentina Kozlova International Ballet Competition New York (Best Interpretation of the Contemporary Compulsory), along with World Ballet Art Competition Grand Prix Niagara Falls, Canada (First Place). Lastly, Camila isn't only talented when it comes to dance but she is also fluent in 3 languages including English, Portuguese, and Spanish, along with speaking French at an intermediate level!

Mitch Kilby is a native of Newcastle, Australia. He began his training at the Marie Walton-Mahon Dance Academy in Australia, and in 2004 was accepted to the Joffrey Ballet School in New York City, where he subsequently earned a full scholarship. In 2006, Mitch took a position with New York Theatre Ballet, where he was an ensemble member and later a principal dancer for 12 years. He performed such roles as the Devil in “3 Virgins and a Devil," Dancing Master and Step Sister in “Cinderella,", the Lion in “Carnival of the Animals”, Catalabet in “Sleeping Beauty,” as well as Spanish dancer, Snow King, Mouse King, Chinese dancer, and Drosselmeyer in the “Nutcracker”. Mr. Kilby has danced works by Agnes DeMille, Mathew Neenan, Sir Fredrick Ashton, Jose Limón, and Merce Cunningham, among others. Mitch has had the pleasure of playing both the Grinch and Charlie Brown for the New York City Pops at Carnegie Hall. He performed with The Paris Opera and the Theatre of Nations' production of 'Miss Julie' at the Lincoln Center Festival. In 2015 he joined Ballet Grandiva for their Japan tour. In 2019, Mr. Kilby was cast in the Park Avenue Armory's production of “The Lehman Trilogy” directed by Sam Mendez. Mitch has served on the faculty at The Ridgefield School of Dance, Woodbury Ballet, Complexity Dance Center, The Mae Mae Dance Studio, Defying Gravity and Contemporary South Dance Company. He is currently an Instructor at Kick Dance Studios, Fancy Feet, Thrive: The Essence of Dance, Amanda’s Dancextensions and Garden City Dance Studio. Mitch has trained dancers for the Connecticut Classic, and YAGP. He has also coached partners for pas de deux work. Mr. Mitch loves to work with children and has a upbeat and positive teaching style. He understands how dancers perform, and provides technical skills while instilling a love for the art form.

Ivan is thrilled to join the faculty of Garden City Dance Studio! Ivan started his dance journey at the age of thirteen in Sierra Vista, Arizona. At nineteen, Ivan relocated to Los Angeles to work closely with Debbie Allen and Chloe Arnold. Ivan studied with Tessandra Chavez, Tyce Diorio, Karen McDonald, All Khaniashvili, and Vitaly Artiushkin of Bolshoi Ballet. Ivan has toured the high seas for several years and visiting countries like Spain, Italy, Australia, New Zealand, Thailand, France just to name a few. In the midst of it all, Ivan landed a wonderful opportunity to dance in Tokyo Disney's Big Band Beat! Since then, Ivan has relocated to New York City in 2015 and later joined Chloe Arnold's Tap company Apt 33. Ivan is currently an Artist in Residence at American Tap Dance Foundation. Ivan was 2nd assistant choreographer to Chloe on Ames Corden Crosswalk The Musical for THE GREATEST SHOWMAN starring Hugh Jackman, Zac Efron and Zendaya. Ivan has performed on Good Morning America and has feature film credits. Ivan cannot wait to meet each of the students at Garden City Dance Studio to help achieve their success! Let's fly! 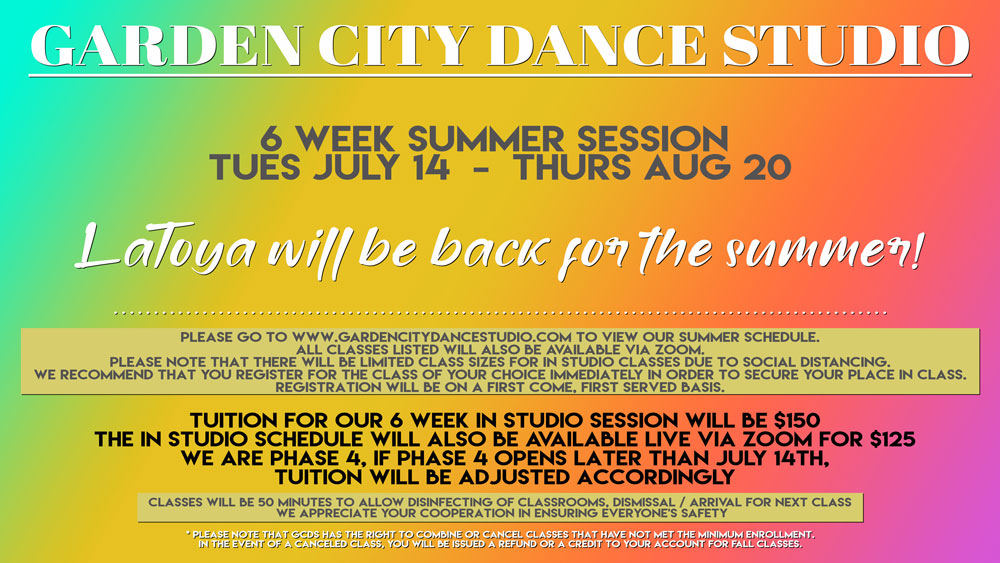